As promised in the mail pr0n thread, presented here for your enjoyment are the Devil's Nest Small Crown chips from CPC. My original plan was a first post with the photos, details and a few notes with a second post explaining some of the design considerations, inspirations and some of the little details contained within. The second part kept getting wordier and wordier, so I've taken a few of those highlights and condensed them here. If there is enough demand, I'll post an unedited version. 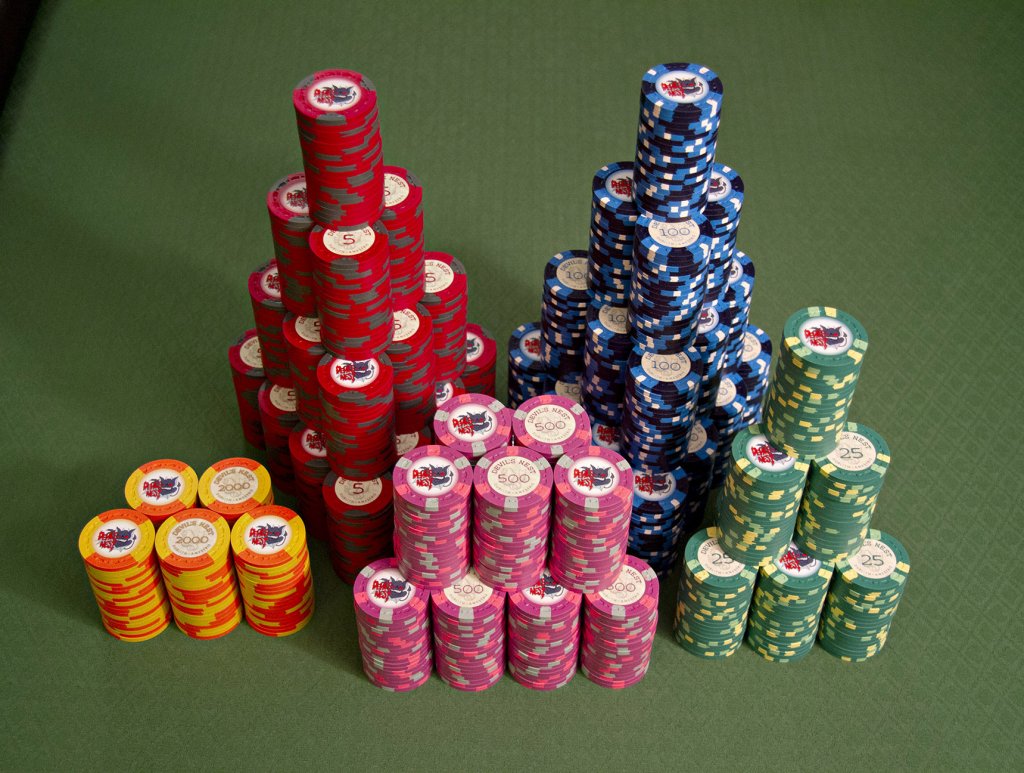 For those unaware of the reference, these are a tribute set to the manga and anime series Fullmetal Alchemist, specifically Fullmetal Alchemist: Brotherhood. First seen in episode 13 of Brotherhood (episode 30 of the original series), the Devil's Nest serves as the base of operations for the homunculus Greed, one the of the primary characters in the series. 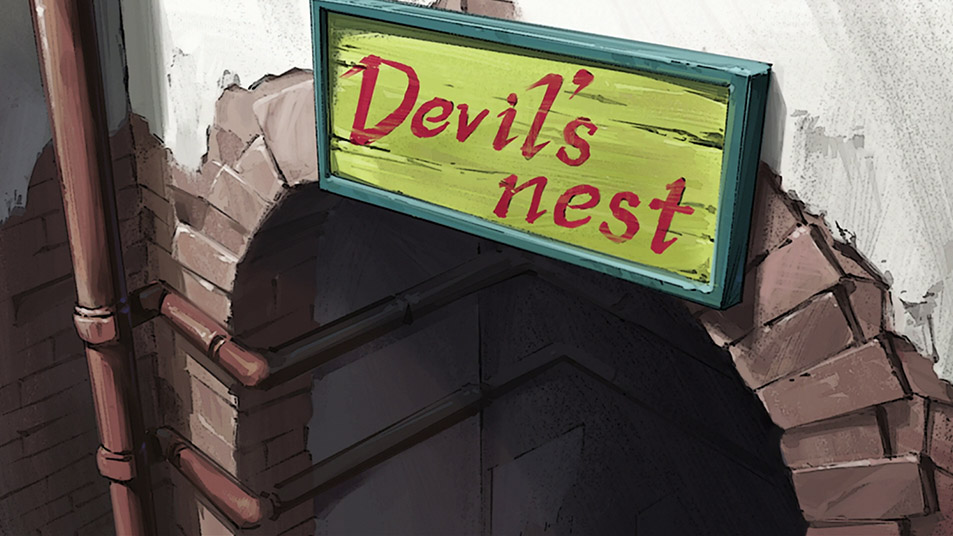 It's located in the smaller town of Dublith in the southern portion of the country of Amestris. While the location is only briefly seen in this one episode, it's easy to picture this as a bit of a speakeasy and it wouldn't be a stretch of the imagination to see a table or two of various card games being played there.

Looking at older files when I started to work on this again, I found my very earliest pokes at this back in 2011! It was a half-assed attempt at rectifying the little demon figure which is seen on a matchbox during the episode. 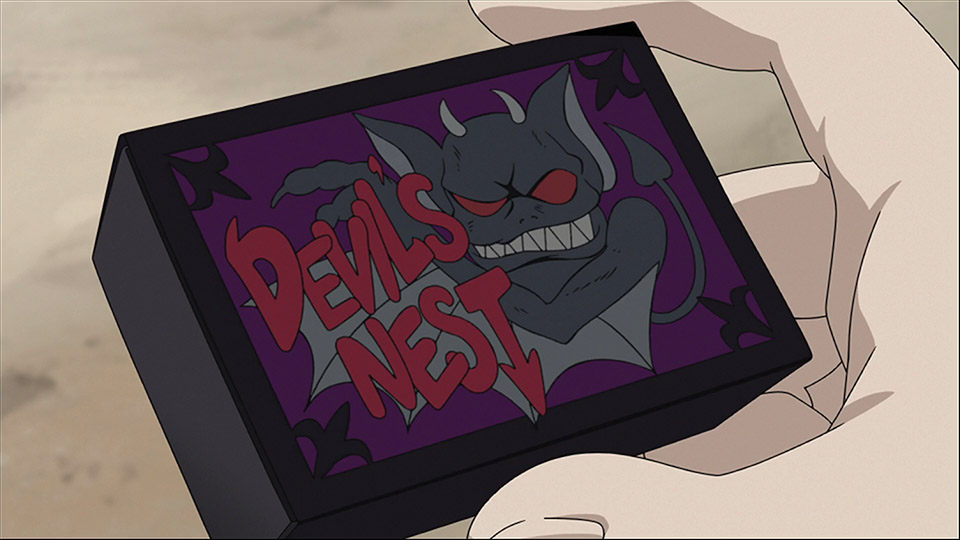 I knew this could make an interesting chip inlay design, but struggled to get it extracted from this screenshot that far back. I do remember the early plans were for this to be on the FDL mold, for somewhat obvious reasons.

The availability of the SCrown mold made me dust this off again and do a proper re-projection and clean extraction of the demon from this. I didn't need another chip set, but the pieces for a set I have wanted were finally falling into place. 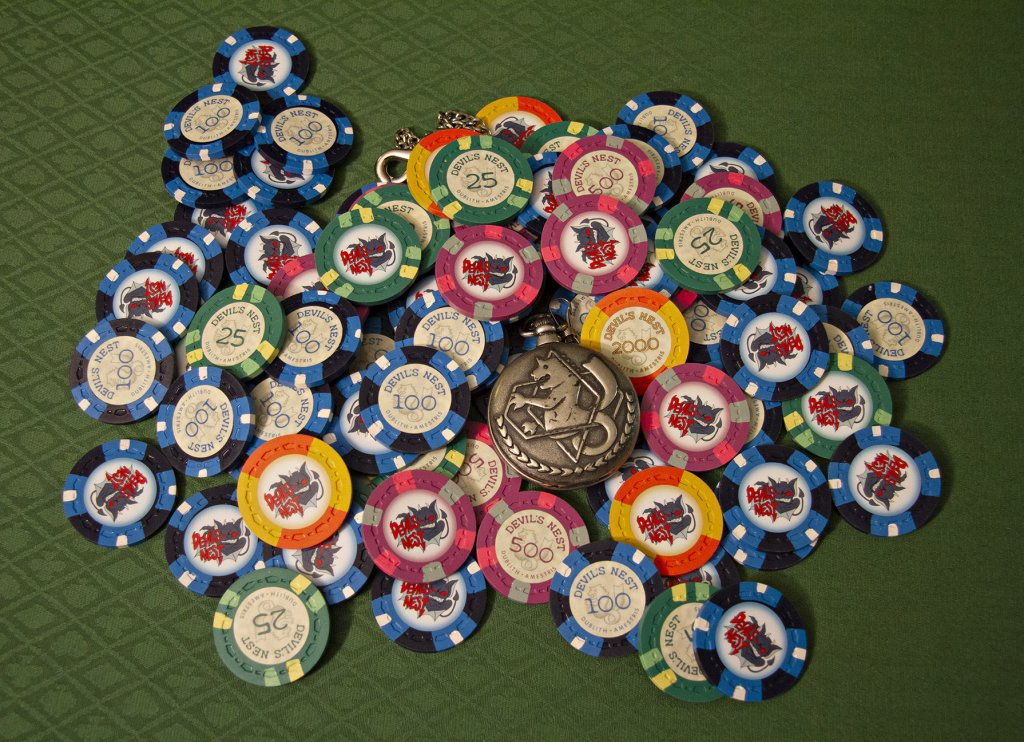 The replica watch here was a gift from a nephew quite a few years ago. In the story, the silver pocketwatch is both the license and I.D. for the State Alchemists. I'm not sure I'd imagine the story's protagonist sitting down and playing a game of cards, but it might not be that uncommon for some of the other State Alchemists.


These are intended as a cash set. The in-universe unit of currency in Alchemist is 'cenz'. This is roughly equivalent to the Japanese Yen which usually exchanges for around 100 Yen to the US dollar or conveniently, cents.

My game has frequently played nickel/dime NLHE on what we jokingly call "bottle share" night, where we bring a bottle of something we're drinking and enjoying to give others a chance to enjoy as well. Before COVID shut down the game, we were starting to play more 0.25/0.50 NHLE with less emphasis on the beer and a bit more on the poker. This set was designed around a bit of the current but also allowing for the future, but nowhere near as deep as some of my other sets have been.

Detailed fronts and backs of all five chips: 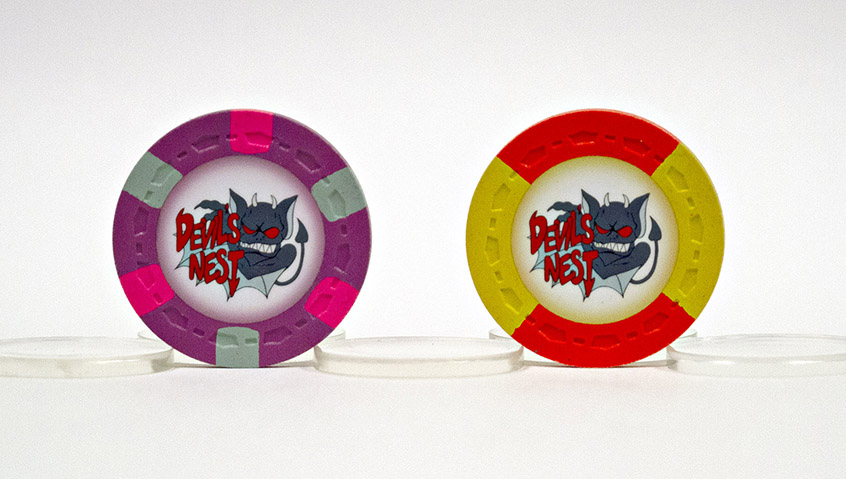 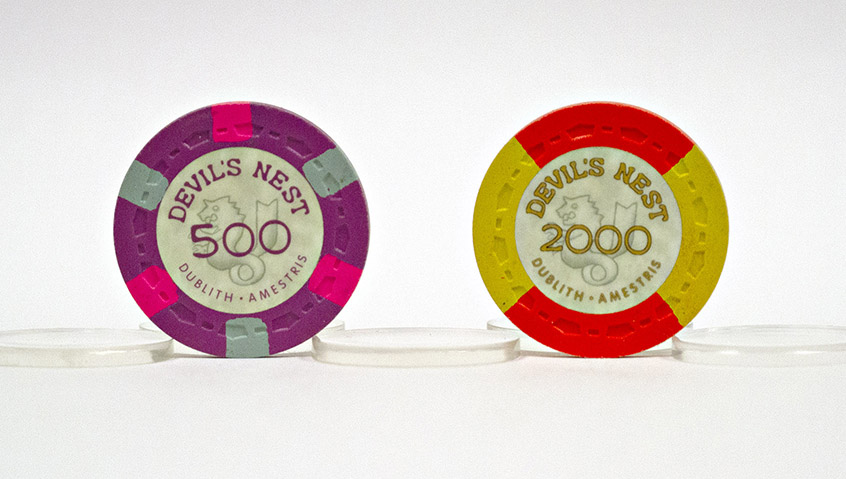 The faces feature the demon and the name of the Devil's Nest as seen on the matchbox. The back was going to be an official looking seal from the "Central Government of Amestris" permitting use. No matter how I tried, the text became much too cluttered for the inlay, leading to this simplified version still showing the dragon rampant which serves as the symbol of the country of Amestris as well as the state alchemists. It's a subtle nod to the series in that if you don't necessarily know the reference or the Devil's Nest itself, you're probably not going to know where these are from (and wonder why Dublin is misspelled! ).

The color match fade on the front was to try to make it less stark as the plain white background was too jarring. I decided on color matching the text on the backs just to make that side a little less bland.

The colors and spots:

The 100 was the anchor for the set as I played with that color combo after seeing the home uniforms for the Winnipeg Jets several years ago, which led me to my CPC color sample set to see how well it would work in reality. The 5 was a no-brainer as I have always loved the MGM Grand $5. 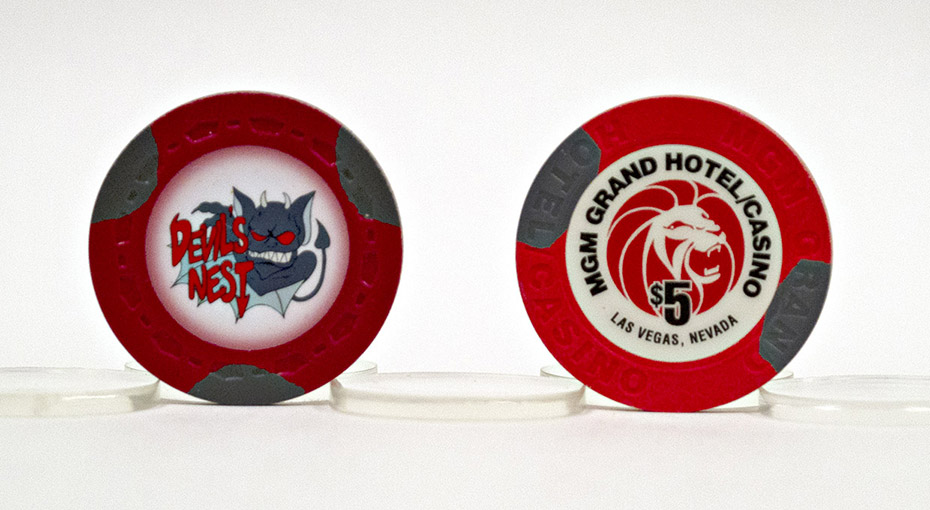 As I kept playing with the color sample set, I realized I could use the base Vegas colors, but assign them to their cenz cousins. From there, I saw I had even color transitions happening, especially if I kept the spot colors chromatically 'close' to the base colors. The 2000 was highly inspired by the half-pie Tropicana 50-cent chip in my collection... 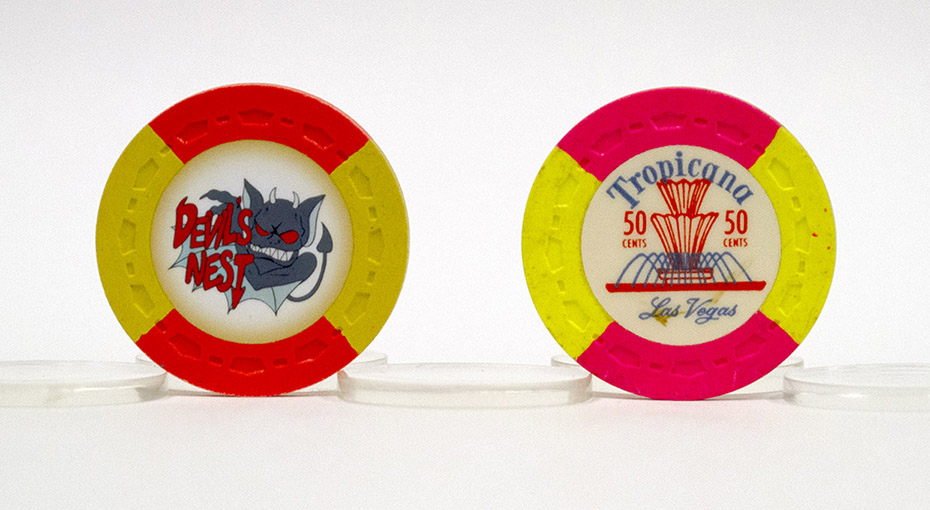 ...but really was settled after seeing a scan of the Aladdin half-pie $500 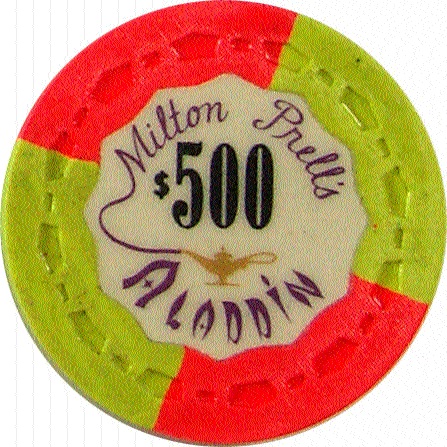 (Chipguide photo and not in my collection... but I wish it was! )

My biggest hold-up and the last one that I settled on was the 500, and that came about only once I was reminded of the Golden Nugget $500 when watching an older episode of High Stakes Poker.

The spots are mostly ones that TR King had available during their run. The two color spots on the 25 weren't done by TRK, but the pattern was. The U spots on the 100 are the wrong shape (and 4U vs. 3U), but are "close". TR King never did a 6 spot, but did a 5 spot so I figured I could get away with the cheat. The plan was to not be so radically different they would look out of place in a set actually from TR King.

I opted for a somewhat non-traditional spot progression here, choosing to instead put my favorite and the more elaborate spots on the chips that would be on the felt the most. From there, I then used progressively simpler spots on the denominations "further away" from those. I've become a big proponent of this concept in recent years and only wish I would have done something similar in my previous sets. 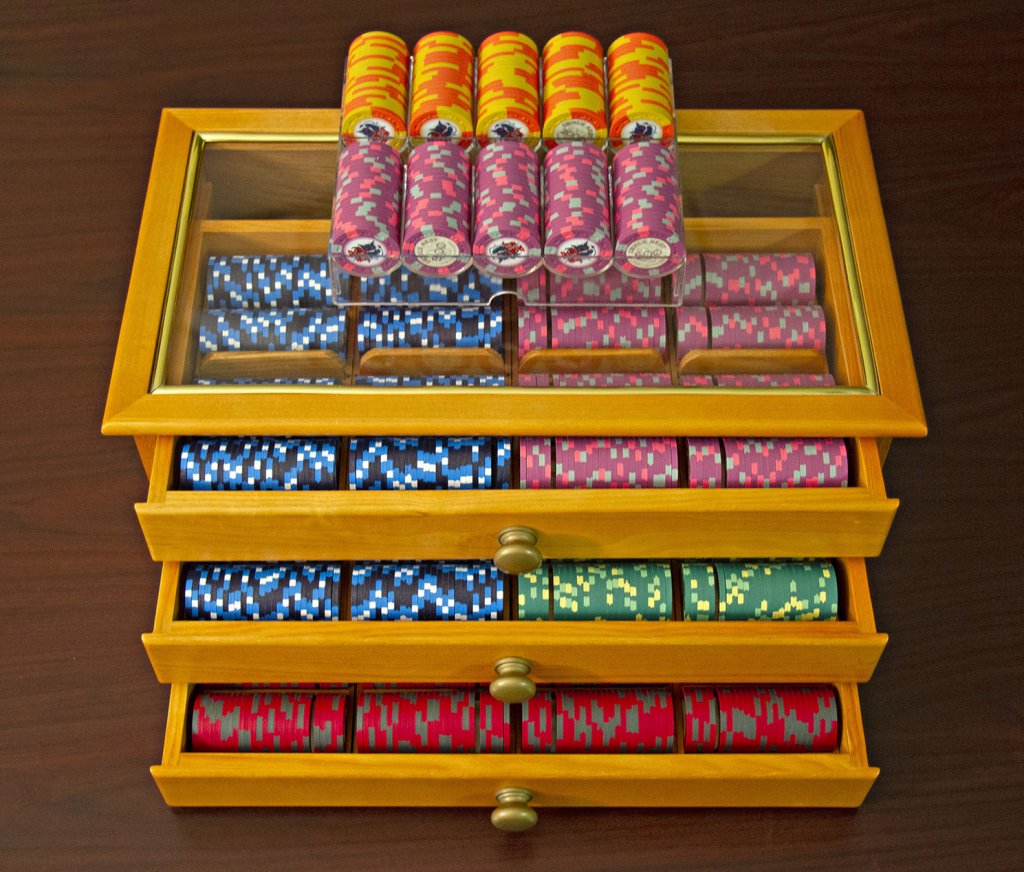 Finallly, I've had this box for a while and it's seen various chips in it, but once I placed the order with CPC, I cleared it out, opened up one of the drawers to make more room (it had a space for a couple decks of cards and some dice and a dealer button). I found the two rack covered box on eBay and knew it would be useful for the last two racks of chips that don't fit in the box.

(The 100s are a hair thicker than the others and there isn't enough room to get a spacer to break the rows into barrels of 20 with 'extras' which is why they are laid out in their wooden trays a bit different than the rest.)


I'm incredibly pleased with how these turned out. Maybe all it took was six previous custom sets to finally turn out one that I keep looking at and giving myself a bit of a pat on the back over! As we have seen elsewhere here on the site, the colors in the photos lost a little bit of the punch they have in real life and in the un-posted versions on my computer.

I was honestly a bit surprised when these showed up. I didn't expect them for another six or eight weeks. I know I slipped these into the CPC queue very late in this cycle and with only a couple other PCF'ers having received and posted their Small Crowns, I thought these would be here sometime in the fall. As luck has it, my first post-COVID game is next week and these will get to see the felt for the first time then.

Enjoy the pr0n and some of the story and thinking behind this set!

One of my favorite animes, and an amazing set and story. Thanks for posting.

Looks sick!! Those 2ks look like bomb pops in stacks!!!

Excellent story! I hope you have fun (and rungood) with your chips for decades to come!

Fantastic job sir!! Wow!! The Tropicana Gen 1 frac is one of my favorite chips! Also a huge fan of the T2k chip, so absolutely awesome there!! But man that T500 chip is insane also! Kind of along the lines of the Silver Tounged Devils chips that we own!

I hope there is an option for a sample set at some point! Count me in if possible! Long live the devil chips!!

Wow, what a write up. Excellent looking set Gil, congrats!

Great set Gil, awsome to have you back posting.

Awesome set! thanks for sharing.
K

I would be interested to see the unedited version as well as your other custom sets!

Congrats Gil. That's an awesome set you have made!

Wow missed these! Well done! If you have time you should upload them to the ChipDB I’m sure many others would enjoy admiring this set!

Those chips are looking great in stacks!
You must log in or register to reply here.

A Glimpse Inside the Goldfish Bowl - the latest relabel project - The Rabbit Hole.

The Bank Tournament (CPC) - The end of my chipping journey ?
2

A Glimpse inside the Goldfish Bowl - my chipping journey so far ..