Hadn't planned to play poker Monday, but didn't play at all last week and was just itching to shuffle some chips

Headed to Silks for their $150 buyin, 10k guarantee

We start with 30K and I manage to build it up to 90K when this hand happens:

Raise in LP with KJ off, guy on my immediate left calls. I put my hand up to block me seeing the flop and check dark to him while I watch him and let him know I'm not looking so I don't know if I hit but tell him I'm probably ahead. He checks.

Dealer brings the turn and I do the same again, this time he bets 5K. NOW I have to look...........flop was 58J rainbow, turn a King! Bingo bango bongo (thanks Mike Sexton), we got heeem! I checkraise to 15K and he thinks for a bit and calls. River is an offsuit 6 and I check, giving him rope to hang himself. He shoves all-in, I cover (had about 90K to his 60k to start the hand) and he flips over pocket 8's for the flopped set, argh!

I see my stack dwindle down to 20K before I rebuild it to 110K and make the final two tables. One of the rebuild hands I get it all-in preflop with JJ and there is a miserable reg who loudly criticizes other peoples play as the only caller, so I state out loud "I hope you've got Tens!" and he flips over 8's and I'm like "that works too" until................

the flop comes KT8 and I hang my head in despair. The turn brings an Ace, so I have to hit a Jack or a Queen or I am WAMBOOZLED! (thanks Norman Chad!) and the Q hits the river and I shout out in excitement

my FAVORITE hand from the event:

One caller and then another guy repops small to 4K. We both call

We both check and the guy bets 6K. I think for a bit and checkraise to 14K. I figure he'll think his overpair is good and I have a smaller pair he is ahead of and that I was just putting him on an AK type holding, so I might induce him to stack off here. Sure enough he shoves, I snap and he flips over KK. We dodge the 2-outer and send him to the rail.

I mention how if we do a 36-way chop we'll all get like 300 bucks AND PokerNews would probably report on it since it'd be pretty ridiculous, but I'm unable to convince 35 other players to do it.

Manage to get down to the final two tables and half of us are going home with nada. It takes a little bit but then we're 4 spots from the money, 2 spots, now we're on the money bubble! Someone asks if we want to pay the bubble, everyone seems cool with it except one player (who is that miserable reg who was shit-talking others play)

I manage to get the best of him in a few key spots, shoving A6 suited, he looks me up with A4 offsuit and I double, and I got him in an earlier hand as well. After doubling through him I have a healthy stack and raise AT offsuit and he comes over the top all-in with a healthy stack from the blinds. I almost make the call but wind up folding and he shows A2 offsuit, argh! Would've been so juicy to stack him.

A short-stack shoves the button and I look down at A2 in the SB. I make the call and see the bad news, he's legit with AK here. But Poker Jeezus is smiling down upon me as the flop brings a 2 right in the door and I hold, sending him home on the stone cold money bubble. He's getting up to go and I stop him and reach into my wallet and hand him a $100 bill as a small consolation for the bad beat bubble bust since I'm guaranteed $350 or something now anyway and the world could use a little more kindness.

With the bubble burst we head to the final table. There are no soft spots there, lots of regs I see crushing the local tourney events, the cream really does rise to the top. I play patient and survive long enough to see the miserable reg commit ICM suicide with 6's preflop 5-handed when myself and another player were short, getting it all-in preflop against KQ suited and the flop was 9TJ and he was done. Not long after the other shortie busted leaving me three-handed with two really strong opponents who had a lot more chips than me.

I almost lucked out again when the button raised with AK and the SB shoved with KK, but with me so much shorter than both of them and they play all the time against one another, the button knew the SB wasn't shoving light there, and folded it face-up, then the SB showed his hand.

I'm happy with the result, went deep and don't really play much Hold Em or tournies these days, so felt good to know I still got it. Here's some shots from the event 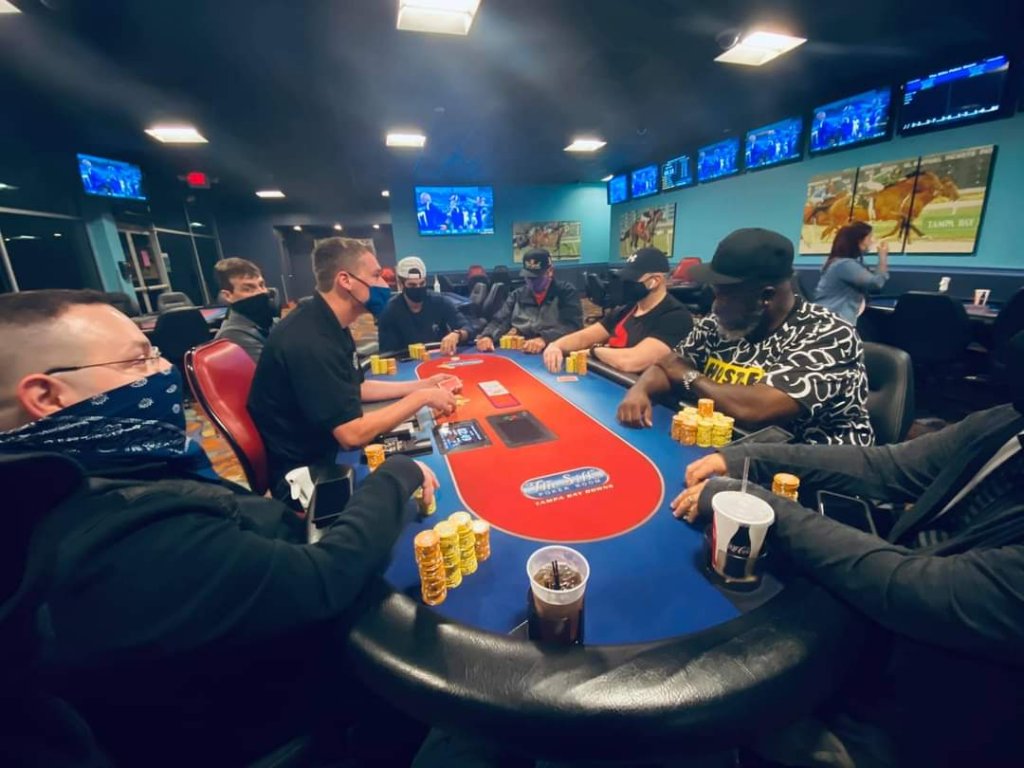 Can't believe the guy folded AK, but it was the right move in this one case. That's gotta be rare. AK must have been covered, right? Not sure anyone could pull that off 3-handed if they were the big stack!

Can't believe the guy folded AK, but it was the right move in this one case. That's gotta be rare. AK must have been covered, right? Not sure anyone could pull that off 3-handed if they were the big stack!
Click to expand...

They were both monster stacks compared to me, and were pretty close to one another

He didn't snap fold, he thought about it for a minute

Holy crap, the Jags were winning. Congrats! You, I mean. Not the Jags.
You must log in or register to reply here.

L
Best strategy against a smart maniac heads-up as the little guy?