mid-week game (last night), so not all that crazy for the most part. mostly tight (but bad) regs with a couple of tourists in the mix. i've been at the table about 3 hours and the following hand goes down.

two limps to me in the CO and i overlimp KcTc as does button. small blind completes and BB makes it $35. both limpers call and i can see button preloading his call. i flat. button calls as telegraphed and SB folds, so we're five ways to the flop.

notes on players: BB is older guy with his wife behind him and has about $800. he sat about 30 minutes ago, but i'd already seen him involved in two hands: one he was the PFR, c-bet and check-called turn and river with TJs when he made top pair (T) on the flop and was good. other hand he was the PFR and check-folded the flop. four players in each of those hands iirc.

HJ is a decent player, but has made a couple of really thin calls when villains took odd lines. he has been right so far and is at about $1100.

i have basically no info on button. he sat down about an hour ago, but has walked and been absent for much of that time. i've seen him play two hands, one he won 3-betting pre and another he won raising a flop lead by the PFR. he has about $600.

i cover everyone. in retrospect, i think i should have raised pre rather than overlimping, but moving on...

BB leads for $70, MP folds, HJ calls. button is not telegraphing his action at this point. my play?

Sounds like BB and HJ are both stations - in that case I take the ridiculous odds offered and call. If we make a straight it should be pretty well-disguised and our flush would be backdoor, so no reason to think we couldn't get paid for at least a modest river bet as well.

Even though, as Norman says, the two of clubs never changes anything, I'd raise to $300.

[edit: looking at the stacks again a shove is bad under all conditions, if I were to bet it would be $225 but as stated below I'm not raising]

Normally I'm shoving every time with this hand to build up our chances of winning this pot while fold equity is here for all, but the BB concerns me. I don't like the lack of history with the BB. Sounds like he bets when he has a hand and checks when he doesn't. The question is, how strong. The $70 is an odd bet, seems like he's either doing pot control (AA, AQ, KQ) or worse, trapping (JJ). <-- this is what I'm fixated on right now.

Given the size of the pot and what little risk there is to see a river, I'm flatting. Once BB's holdings are revealed it should help you for the rest of your session.

I don't know. It looks an awful lot like pot control to me. If he was trapping wouldn't he just check there? Unless this guys is a really tricky player, and he is betting small to induce a shove. But how many tricky small-bet-to-induce-shove type players are old and have their wives sweating them? Not too many, I would imagine.
M

I can't agree with a raise here. Villain has taken a pretty odd line (1/3 pot bet on flop, and 1/6 on turn). I hate taking the passive approach here, but I think I'm just taking the incredible odds and flatting. As was mentioned before: backdoor clubs is gonna be hard to put you on, but I'd be weary of the 3c.

I'd flat but if button raises I have no problem sticking it in here.
J

there is a river decision i'd like input on as well, but i don't want to spoil this discussion as i think it is much more interesting than the river play.

i was and am torn between flatting and raising, so i would like to hear from a few more folks - strange, chicken, mipevi, roman (if he's around) - before moving on.

jbutler said:
there is a river decision i'd like input on as well, but i don't want to spoil this discussion as i think it is much more interesting than the river play.

i was and am torn between flatting and raising, so i would like to hear from a few more folks - strange, chicken, mipevi, roman (if he's around) - before moving on.
Click to expand...

My first instinct was to raise to $150, but I think if we make our hand on the turn it's well disguised enough that a check here works. If I were to raise it'd be slightly over a min raise to induce the other players to call with the likelihood that the original bettor flats. That said, there is probably more value in flatting the $70 and hoping everyone calls.

You didn't ask me, but I think raising is probably better, if only to get ace-x and other random hands that can beat you to fold (or pay for their draw).

If you knew BB had QTdd, and HJ had T9o and Button had Ac9c, would you call or raise?

Also, I'm having a really hard time figuring out what BB is doing.

Did I miss what size your stack is butler? I think that definitely comes into play.

Depending on its size I'd likely shove at this point, I don't see any strength from your opponents, you have a really strong draw and as mentioned you could blow off hands that will beat you at showdown and take a nice pot now (or have a shot at "getting there" if you're called)

That being said, a call isn't terrible because the times you do hit you have more hands against you, increasing the likelihood that someone can pay you off on the river.

I'm guessing you call and then the button raises
J

grandgnu said:
Did I miss what size your stack is butler? I think that definitely comes into play.

Depending on its size I'd likely shove at this point, I don't see any strength from your opponents, you have a really strong draw and as mentioned you could blow off hands that will beat you at showdown and take a nice pot now (or have a shot at "getting there" if you're called)
Click to expand...

Alright, I'm in the call camp then. Gives you more opportunity to get someone to pay you off big on the river if you hit
J

okay, ultimately, i flatted. i read HJ and button as weak. they're obviously holding on with something thin or drawing. i have no problem believing i'll get them out with a raise, especially button who would still have BB and HJ to act after him. the problem is i have no clue what BB thinks of his $70 bet. yes, we're looking at the numbers and yes, we're thinking players. but a lot of mouth breathers have no idea that $70 bet is a tiny bet here. in their mind, they're thinking, "i raised to $35, bet $50 and now i'm betting $70. sounds legit." they're like the kind of guy who bets double his preflop raise every flop no matter how many callers he gets.

anyway, especially older guys who did not come up playing big bet poker, i just don't assume that small sizing has a definite meaning. give me another hour or so with the guy and i'll figure it out, but for now i'm in the dark.

BB leads for $70, MP folds, HJ calls. button is not telegraphing his action at this point.
Click to expand...

i flat as does button.

now the BB checks as does HJ. is anyone trying to take this down at this point?

Not at this point. It's tough to get three people to fold on one street, and any big bet would look kind of fishy here. BB is probably looking to check/call unless there is a bet and raise in front of him.

With BB checking river I think this is one of those spots where it's worth throwing out $200 or so and seeing what happens. I'm pretty sure this was as big for a brick for HJ and button as it was for us, and for reasons you described (terrible bet-to-pot awareness) I think BB will likely fold more than he should. I bet $200 takes this down well over one in four times, and $400 won't increase that much. 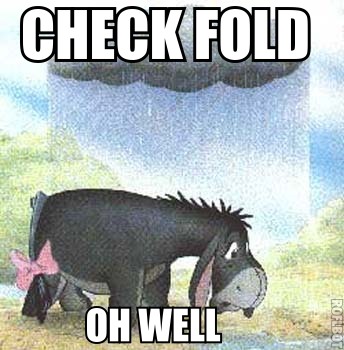 I'm happy with check fold. I disagree that $200 is a proper bet size, more like $350 if you want to induce a fold. His wife would agree.

Pre I'm happy flatting since I'd hate to get 3bet and end up HU vs. BTN with a hand that has nice multiway potential.

On the flop flatting is fine, but I might prefer a small raise to gain position and initiative, maybe ~$125 to go (planning to bet turn 9/A/clubs, possibly K too). Obv BB coming over the top would suck.

As played, on the turn you have good equity and I'd like to get position for river (with a slim chance of everyone folding now) so I'd make it ~$180 to go (opens up the possibility of bluffing brick river vs. HJ too).

As played, I'm not bluffing the river. BB wins with AK?

As played I think check/fold

Preflop: I have some fears with KTs, but the stacks are keep and the players not so good and hero's position is good. Lets try our luck. A little worse environment and I fold.

Flop: Hero is getting offered good odds, this is never a fold. I am mindful of hero's villain reads - sticky with top pair but not so aggressive with air. I kind of want to make BB into fit/fold. So villain bets 1/3 pot, what should Hero do? I could respect a raise here, cleaning up Hero's outs if a king falls and giving Hero the free card option for the turn. However, I think taking the cheap draw is best.

Turn: Same song, second verse. Crowded field, extraordinary odds and a villain in the BB who seems sticky (I'd range him something like JT or TT). Maybe Hero can blow everyone off the hand. But Hero's implied odds (and direct odds) are just too good. Hero is best served to see a river and take his share when Hero hits. That has to be a long term winning play - the semi bluff option might actually be a money loser depending on the villains at the table.

River: A river bet stinks - Hero would be polarized. Hero got a really good situation this hand that didn't pay off, no reason to turn a winning circumstance into a money sink. Let it go and see ace high win the pot.

yeah as i said, river decision not so tough. i checked and button bombed his stack into the middle. BB tanks for like literally 4 or 5 minutes. someone said something about the clock, but didn't call it and BB announces a call. snap mucks from HJ and me and button flips Ac5c. BB tables AxQx and takes down the pot.

Lebowski. Good check fold on river. King on river would have been great value bet spot.
You must log in or register to reply here.

B
Hand Discussion—how would you play differently?