Recently Doug Polk did a poll on Twitter asking what people preferred (rebuy, freezeout or knockout events). Over 7,000 people voted and freezeouts received more than 60% of the vote.

A local room, Derby Lane, in St Pete Florida, was paying attention, and added $185 freezeouts each Friday night in June plus one $540 Saturday freezeout near the end of the month.

As a fan of freezeouts I wanted to show my support. We wound up having 58 entries, which was disappointing. But a lot of folks are playing in Vegas right now so that doesn't help. 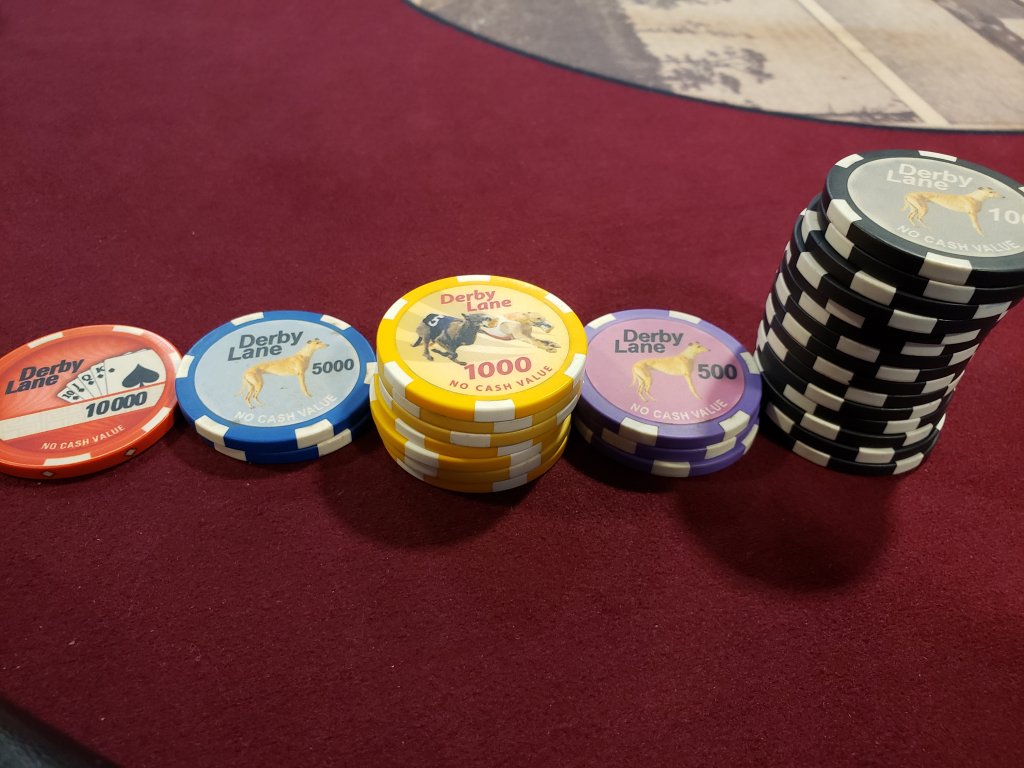 Play was significantly tighter than you get in the unlimited rebuy daily events, which was a nice change of pace. My table had a mix of some weak regs, a couple of LAGS (one good and one just reckless), an Old Man Coffee type and one or two solid players. Not the best lineup but certainly not the worst.

Early on I was chipping up pretty quick, nothing major but it was nice to increase the starting stack 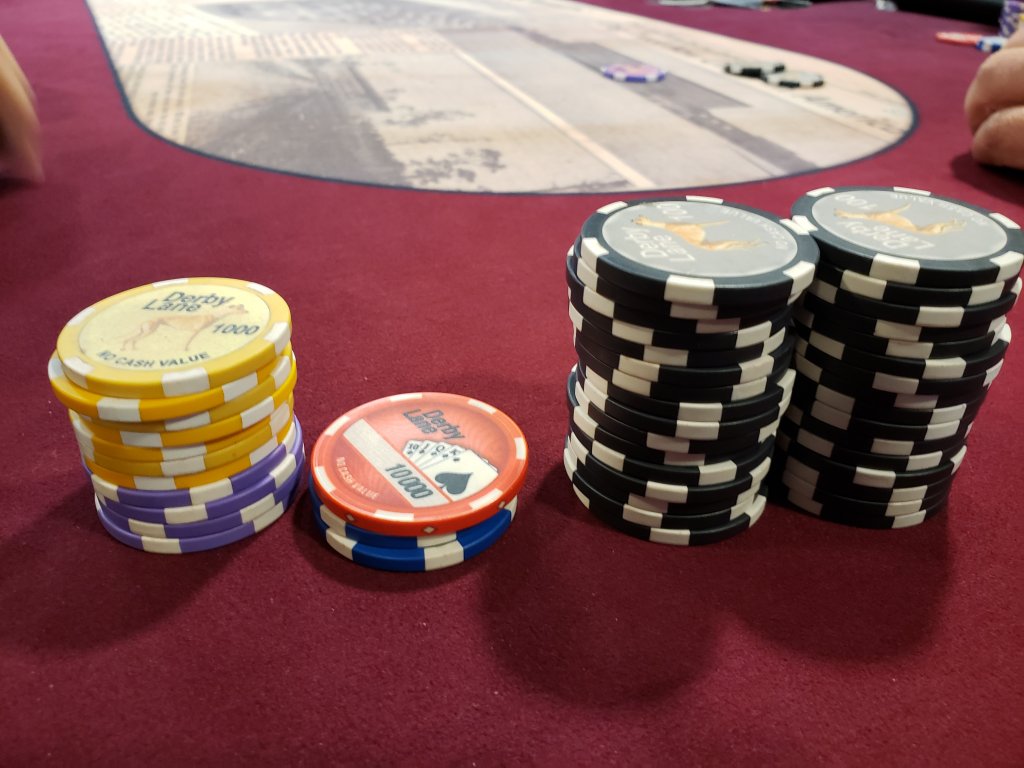 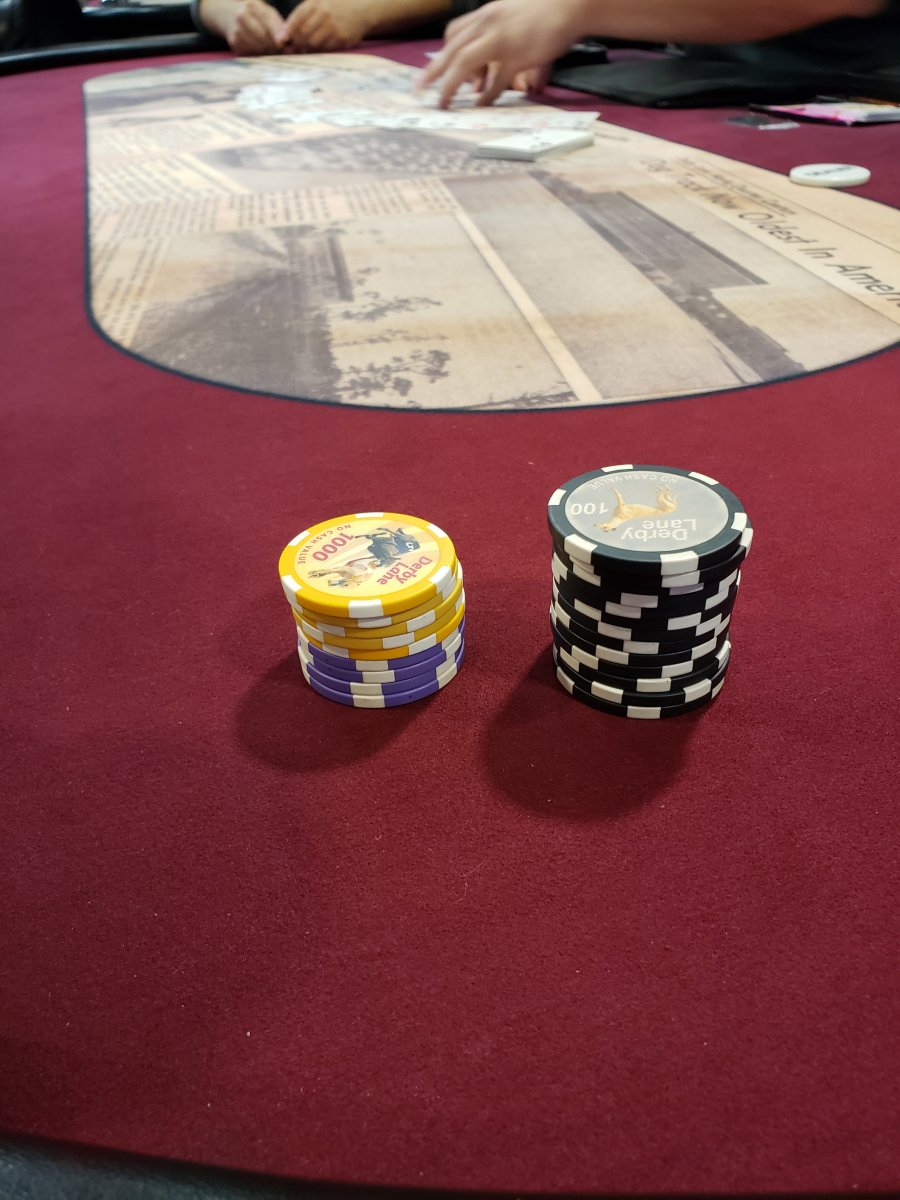 Still, I wasn't about to just lie down and give up.

EP limps for 400 (the guy who doubled through me with AJ on a previous hand), new player who bought in late, Asian guy wearing loud clothing who looks like he wants to gamble limps, SB limps and I opt to shove with

Both limpers look me up and check it through to showdown. The river brings a 9 and I wind up outdrawing the EP limper who had

and the crazy Asian showed down

because gambool? Regardless, we more than triple up and we're back in it! 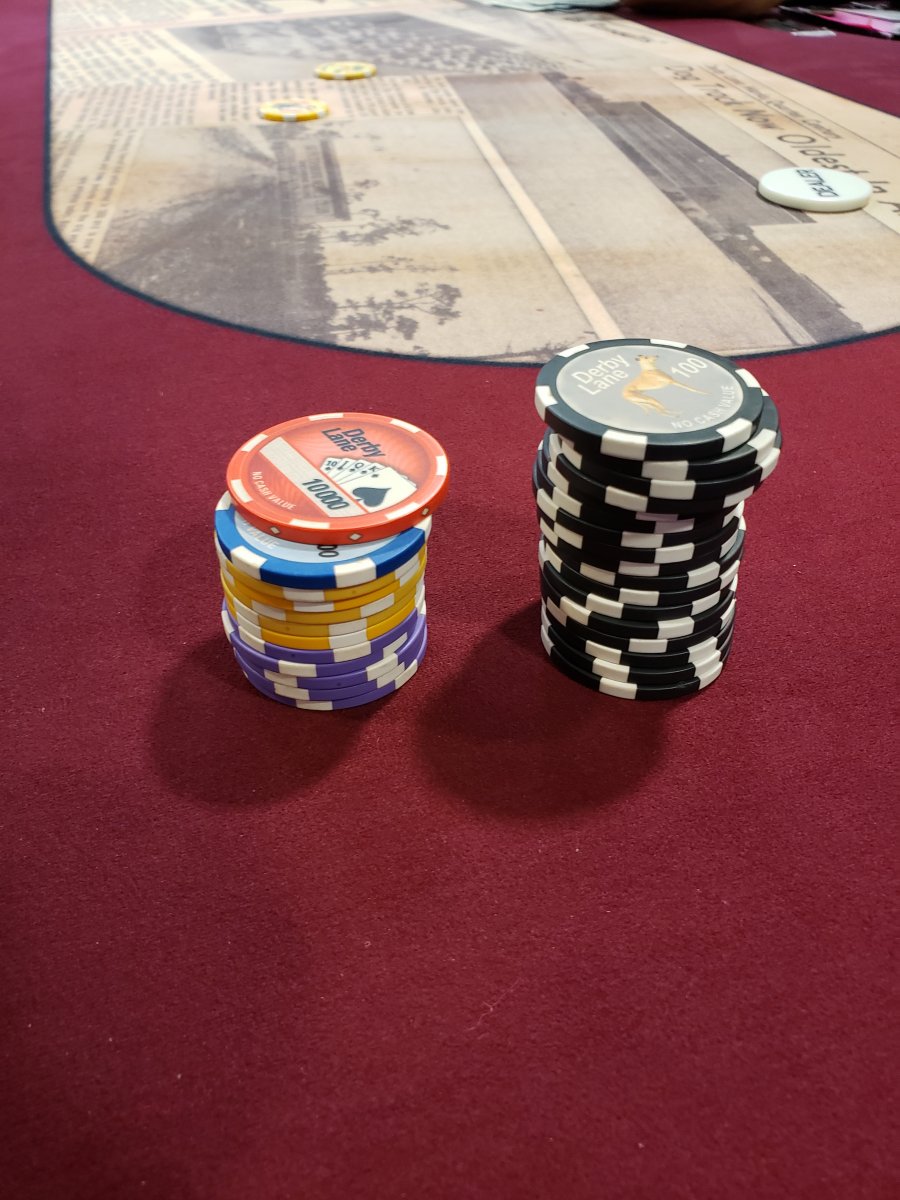 Two hands later we're on the button with

and opt to limp after a couple of other limpers. We see the flop 5 ways and it comes:

The guy who doubled through us previously with the AJ leads, I raise his lead by 3x, he shoves all-in and I snap-call. He has

HURR-DURR! and I hold to double up and cripple him 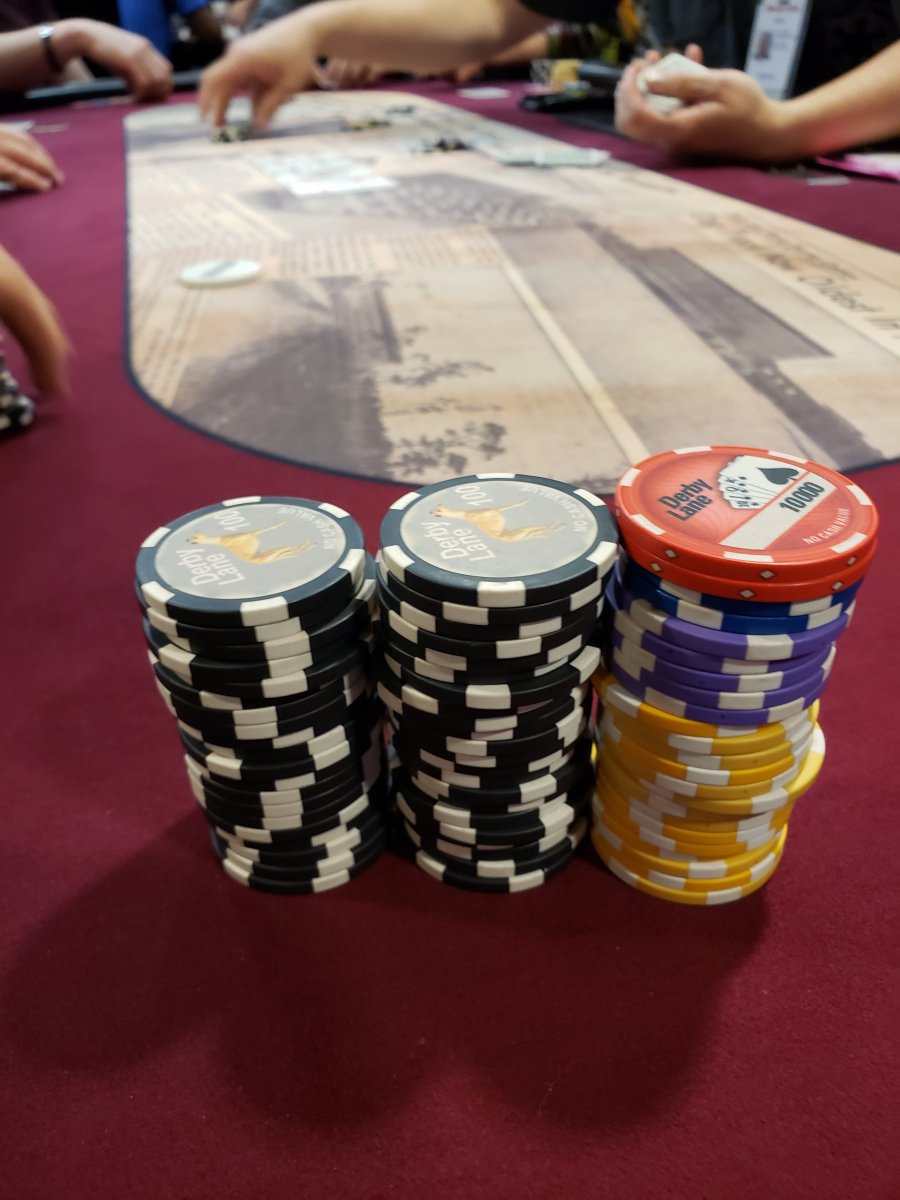 So we jump from 8K back up to around 50K really quickly, and I stayed there for quite awhile, never really making much momentum, just maintaining.

With blinds at 500/1K with an 800 bb ante there's an EP limp, the button limps, and the SB shoves for 30K. The problem was, this guy had seemed relatively solid and hadn't gotten out of line much, and I woke up with

I took quite a bit of time working it through. If I called and lost, I still would have 16K so wouldn't be in terrible shape. I figured at worst I was coin-flipping against a small pocket pair, but figured there was a decent chance I had a weaker broadway ace dominated, or perhaps an unsuited AK type holding.

I eventually made the call and he turned over

I spiked a heart on the flop but didn't runner-runner him so we chopped it up.

Meanwhile, a local pro with over 300K in tourney cashes on Hendon Mob got seated at my table, nursing a super short stack. However he slowly kept chipping it up, and then got into a really funny hand.

Fish at the table raises to 3500 preflop and the pro reraises to 11K, leaving himself 1,200 behind? The fish calls and the flop is

The fish shoves and the pro snaps. The pro turns over:

The fish announces "I flopped it" and turns over

and our entire table erupts in OOOOOOOHHH, AHHHHHHH! as the pro somehow finds the needle in the haystack to get a powerful double up and start to become a threat.

to 3K in the Hijack. I should say I've probably raised 2-3 other hands within the past 5-6 hands and taken them all down preflop, so I appear VERY active at this point and have stacked up nicely: 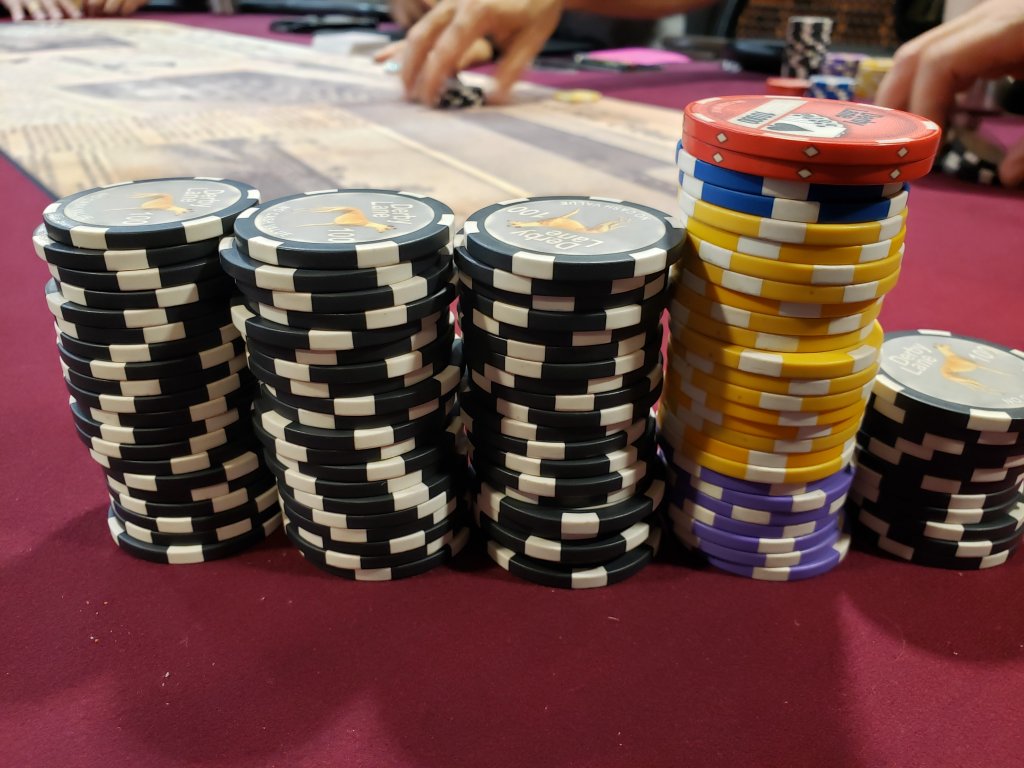 The pro reraises to 11K which is half his stack. I shove, he thinks for a bit and then calls with

I really like my chances at this point, then the flop falls:

on the stupid turn gives him a double up and knocks me back down. Man I was so pissed. Dude has already cashed for 80 grand in half a years time, he doesn't need the fucking luck, give it to me for chrissakes!

Our table then breaks and the pro is busted shortly thereafter at another table, running AK into KQ on an AJT flop.

Meanwhile at my new table I manage to double up my short-stack with AK against JJ (same player winds up busting with JJ against anothers AK shortly after) and hang in there.

We get down to two tables, with blinds at 1/2K with a 2K bb ante and my stack has dropped down to 31K (avg was around 80K at this point I think). A player from my first table who seemed solid but unremarkable raises in LP to 4500 and I opt to shove the button with

. He makes the call with

and I don't improve, finishing one table from the money.

I feel like I should've possibly folded that KQ there, but was thinking I had removal on his potential hands and might be able to force a fold or have a shot at a double up against Tens or something. But I still had play left and could've waited for a better opportunity where I'm first-in with the raise.

The structure of the event was great, I had a blast with my tablemates, lots of chatter and jokes. Aside from that, feel like I played well, got really unlucky against the local pro who must've sold his soul to get such luck at our table.

Now the Tampa Hard Rock has announced they'll be doing a freezeout next month with satellites to it plus a guarantee, so interested to see what they'll bring to the table. My closest room Silks is blind and not paying attention, refusing to innovate and just kinda stagnating. It's sad, because with the right changes they could have a shot, but they just seem poorly led.
Last edited: Jun 10, 2019

Argh, the pro that lucked out with the AQ against 45 on the A23 board and then took a chunk of my stack with

Must not be jealous.....must not measure myself against others successes...…….grumble grumble
You must log in or register to reply here.

Tourney Sloppy dealing- do you speak up

L
Best strategy against a smart maniac heads-up as the little guy?

Tourney When to go down from 2 to 1 Table